Save The Cassowary
Home 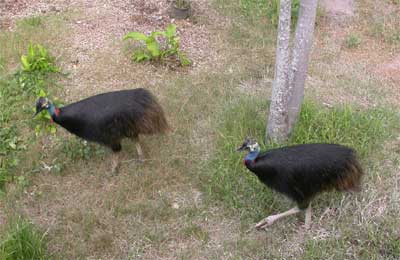 These two young Cassowaries are about 2 years old.

The cassowary of the rainforest of Northern Queensland is in a lot of trouble and more than half the Australian population do not even know that such a bird exists.

The Australian cassowary is the second largest bird in the world next in size after the ostrich and larger than the emu.  It is a very beautiful and a very important bird that lives in our northern rainforest.  Some biologists claim that without the cassowary at least 200 species of trees and plants could not grow naturally in the rainforest.

The cassowary walks around the forest floor and picks up the fallen fruit, which is an important part of the cassowary�s diet.  After the seed has passed through the cassowary the seed can then germinate and grow into a tree.

When Captain Cook arrived in North Queensland he kindly released the first pigs into Australia in the area of present-day Cooktown.  Like all the other feral animals running wild across the country (the cats, foxes, cane toads and the clear-fell woodchip companies), the pigs have become a scourge to the nature of Australia.  Wild pigs are now in their thousands.  In our northern rainforest they eat the fallen fruit that should be the food of the cassowary.  The pigs destroy the seeds of the wild fruit so then the seeds cannot germinate and the cassowaries are now starving in their own forest.

Because they are now so hungry, the cassowaries have to travel to the edge of the forest in search of food.  Often domestic dogs will then chase them.  Some people report seeing cassowaries being run to their death by domestic dogs or run into the sea and drowned by dogs.

Because cassowaries are starving they get used to people giving them food, they may then chase people and in rare cases kick them and so get a bad name.  But, like the dingoes on Fraser Island, they are starving and it�s not their fault; it is ours.  We have caused the problem so we must fix it.

The most optimistic figures for the cassowary is around a thousand left in the wild.  Even if the number were 2000 cassowaries left it would still be a national disgrace.  The numbers are now falling rapidly.  Many birds are too old to breed and the young cassowaries find it hard to survive the pigs and dogs; and cassowary eggs are a sitting target for the pigs.  Every year there are cassowaries hit by cars and there are still some so-called sportsmen who will shoot cassowaries.

Did you know that we the Australian public could breed cassowaries at no cost to the government and get the numbers back to at least a safe level?  So that when we rid their home of the pigs we would have some cassowaries with which to restock the rainforest.  Strangely though, we are not allowed to breed the cassowaries back to safe numbers, because cassowaries are becoming rare.

It appears that Germany would buy every wild pig that we could catch.  I say catch, because you cannot shoot the pigs, they are too smart; as soon as you shoot one the rest will disappear.  However because they are smart you can trick them into traps.  An industry is out there just waiting to happen.

You are not allowed to shoot those feral pigs anyway because they are in a National Park and so it seems that in the National Park the pigs are protected � what brilliant person makes these laws?

The feral pig problem must be fixed and dogs that chase cassowaries taken out.  Please ask the Prime Minister and the Premier of QLD what are they doing to save our national treasure the cassowary

You may like to read some of the sites concerning cassowaries on the links below.  You could come up with some ideas on how to save the cassowary and send ideas to your favourite politician.  There is a single page Print Out on this site about the cassowary; it is in PDF so as it can be easily be printed.  You could send a copy to your favourite politician c/o Parliament House either in Canberra or your capital city. 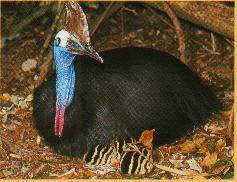 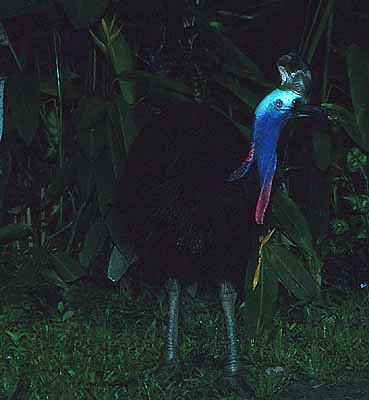 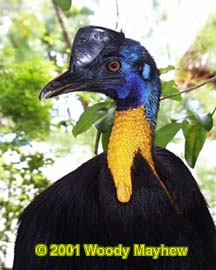